Indulging yourself in something creative is always considered as the best option to achieve something fruitful in the coming years.

We have been living a new life from the last six months and things that were not experienced before. The Coronavirus pandemic has changed millennials’ lives; due to lockdown and social distancing, people might feel depressed or lose their enthusiasm to do something creative.

Lockdown is stressful but giving ample opportunity to learn something new. Amid lockdown, individuals, and business owners, have observed that technology is making its way, and it will be here to say. If you are IT techies who are thinking to polish their technical skills and want to add some value to their resume, learning a new programming language will give you fruitful results in the long run.

Above are the most popular and most searched programming languages across the world. If you are looking for a job change or want to upgrade your skills, this is the high time to take a step forward and learn to code. Here we have mentioned the best five programming languages that you should learn before the pandemic ends as it will open many doors of opportunities.

The Major Question Is Which Programming Language Will Give You Fancy Bucks?

The demand and popularity of different programming languages fluctuate every year—all you need to stay connected with the market to upgrade yourself. Moreover, new languages are coming up with modern features that enable programmers to develop user-friendly apps and websites in less time.

But the major question is which programming language you should start learning. Learning any new language is always a brainstorming process as you are going to invest your time and money into that. It will help if you learn a language based on the following criteria.

The above criteria will help you to choose the best programming language to learn. Here we have addressed the best five languages to learn during the lockdown for better prospects.

The best five programming languages are:

Coding can be daunting but offers many benefits to techie from the career point of view. This blog post is all about the best five programming languages to learn during the lockdown.

No doubt, Python tops the list. When you are talking about the most popular programming languages, you can not underestimate Python’s power in the technology world. It is a widely-used language because it is fast, easy-to-use, and helps developers to create scalable web applications.

If you have been working from many years or new to the programming world, it can help you with everyday tasks. Python is vastly used in web programming, Artificial Intelligence, Machine learning, automation, etc. popular space companies such as NASA also using Python to develop their apps and software. Its different frameworks, like flask and Django, are used to create robust websites.

If you want to make a better future in data science, you can go for Python without any second thought. This feature and functionality makes Python popular among developers and the easiest language to learn. 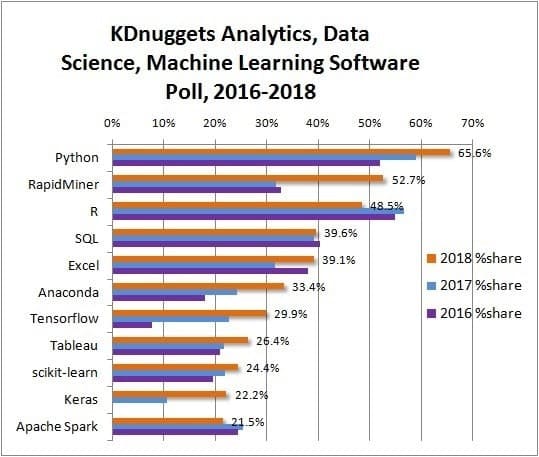 The above chart clearly displays that the share of Python has been increasing over the years as it is also used in other development areas, such as web and application development. Python offers several pros, such as:

Another popular and best programming language is JavaScript that is compatible with most of the web browsers. JavaScript is the popular language because of its ubiquitous use across all the platforms. Probably this is the reason why most developers use it.

These days, the on-demand business model is disrupting many industries; more and more startups are jumping into the online business model’s bandwagon because it ensures quick profitability. If you want to transform your business by offering multiple doorstep services and upscaling local service business by deploying a user-friendly App Similar To Gojek, you should choose JavaScript over any other languages.

Startups mostly use NodeJS because it lets developers use JS for server-side scripting-running scripts to produce dynamic web and app content before the page is sent to the user’s browser.

Besides, most websites rely on the high functionalities that JavaScript brings. It also makes development easier and saves time for programmers. JavaScript offers certain pros, and you should consider it for your tech-startup.

After Google has declared Kotlin a “top-notch”; language for creating Android apps, you may have imagined its popularity. Experienced developers believe that Kotlin is better than Java. If you are thinking about creating scalable Android app development, then you should learn Kotlin this year because it is definitely the big thing happening in the Android world.

No doubt, Java is still popular, but Kotlin has got native support, and many IDEs like IntelliJ IDEA and Android Studio are supporting Kotlin for making android apps. More than 75% of the Kotlin developers use this language to build android apps while the rest of the developers have admitted that they use it for SDK libraries. 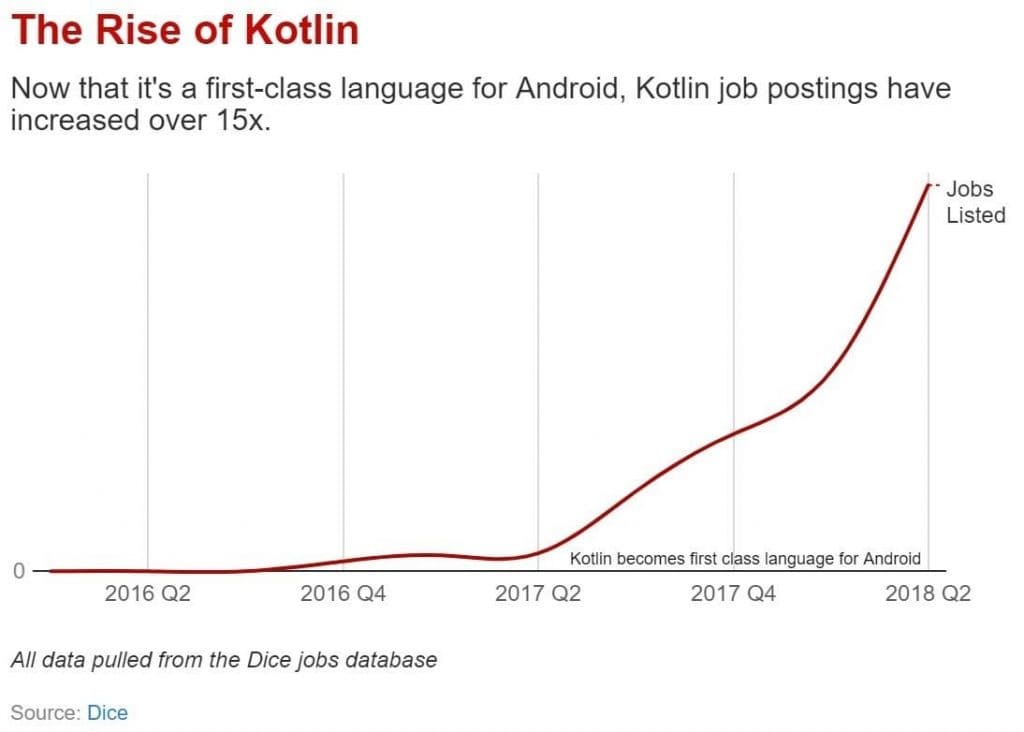 As per Google, Kotlin is the officially announced as the language for Android. The above image clearly states that Kotlin’s job posting has increased over the years. Kotlin allows you to build interactive apps with enhancing tools. In case you are using IntelliJ IDE, you can refactor, search, and auto-complete the code as if Kotlin code was Java and vice-versa.

Kotlin also offers an extensive range of benefits such as :

There are certain reasons why Google has declared Kotlin as the official language for android app development. Prominent reasons for demand are:

Apple’s most used programming language is Swift, as it is widely used for iOS and Mac app development. Apple has announced it as an official language for the Apple ecosystem. As Apple is giving tough competition to Android, if you are one of those techies who want to make an excellent career in iOS apps, they should consider Swift and learn its modern features that make the development process easy.

Apple has captured significant market share and given competition to Android. Moreover, its round the clock community support enables developers to build user-friendly iOS apps in less time. 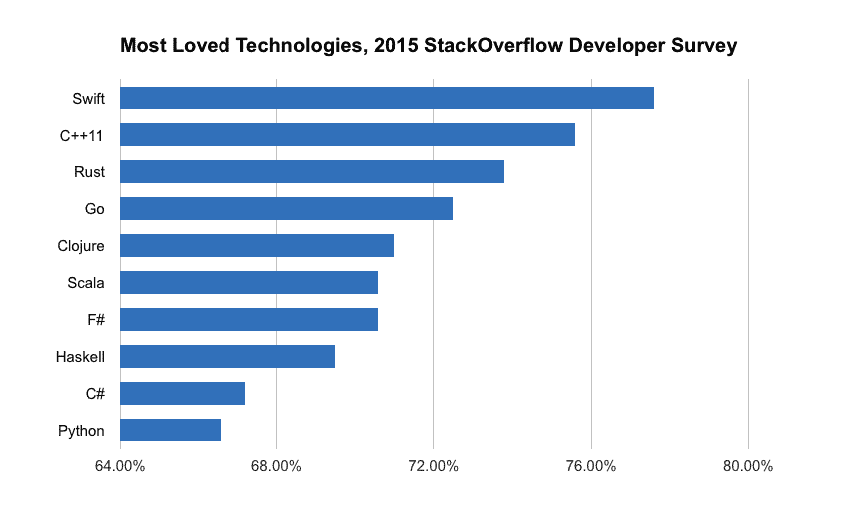 According to StackOverflow’s recent study, Swift was listed among the top 10 most used languages. Swift language has not only received widespread acceptance, but it is the favorite developer’s tool as it offers numerous advantages such as:

There are many programming languages globally, but the demand for C/C++ professionals is still higher. A lot of Government agencies are using C/C++ for multiplatform development because it is universally supported. If you want to become a system and operation level programmer, you should learn this language because it is extremely fast and stable.

C is the most suitable for applications on Windows, Android, and iOS as it develops the app with the help of integrated development products and Microsoft Visual C++. Modern libraries and their ability to support object-oriented programming make the C++ language different in use for developing apps.

Here we have listed various scenarios where C/C++ has been used widely:

Mostly C++ is the language that is used everywhere, but when you want to excel in system programming that interfaces with hardware such as automobiles, robotics, and appliances. Most developers stick with using C++ only because it offers a wide range of usage and compatibility across all the platforms and software.

So What’s The Easiest and Top-rated Programming Language?

List does not end here, above are the best and most popular programming languages to learn. Because the demand for the above languages keeps increasing in the coming years, you can start learning it right now without giving a second thought.

However, you also keep in mind that you should not learn any language based on its ease-of-use. The easiest coding language might not give you the best. If you have decided in advance what kind of applications or web you want to develop and in which sector you want to excel, career, based on that, choose the language and see which fits most appropriate.

There are no rules and regulations like which language is best to work with, but several trends offer some guidance.

The world is going digital day by day, with smart and advanced technology solutions, all you need to stay connected with the world. With the rapid development of Automation, AI, and Blockchain in the various industries, developers are trying to keep themselves connected with the help of technological events and other activities.

The above programming languages are the heart of any application, software, or website. We know that, due to the Corona outbreak, people’s inclination towards online shopping is increasing.

It has a direct relation with the technology, thus, we can say that demand for the software, and app developers will continually grow, because technology keeps evolving with the time and making an individual’s life easy as it was never before.

Deciding which coding language to learn will impact your professional and the types of jobs you land up. Hence, gear up and study each aspect that can help you make better choices.

This concludes the list of best five programming languages you should learn amid lockdown. Take your time, do in-depth research, and then pick languages that will sharpen your technical skills and give good shape to your career growth.

Prioritize also in which sector you want to work like big investment companies such as JP Morgan, Barclays and HSBC are hiring candidates who are well-versed with Java and C++. On the contrary, if you want to work with technology and software companies such as Infosys, Google, Facebook, Adobe, Oracle, you need to learn various programming languages that are trending and boost your job prospects.

In short, if you want to go for web and application development, you should consider Java, C++, and Swift. Whereas, if you are looking forward to developing AI-based smart apps, you should focus more on Python. No matter, which coding language you decide to learn, it is important to remember that the technology world is constantly evolving; you need to sharpen your skills with the ongoing trend.